U of A spinoff company works with some of the world’s largest pharmaceutical companies to streamline an expensive and time-consuming process. 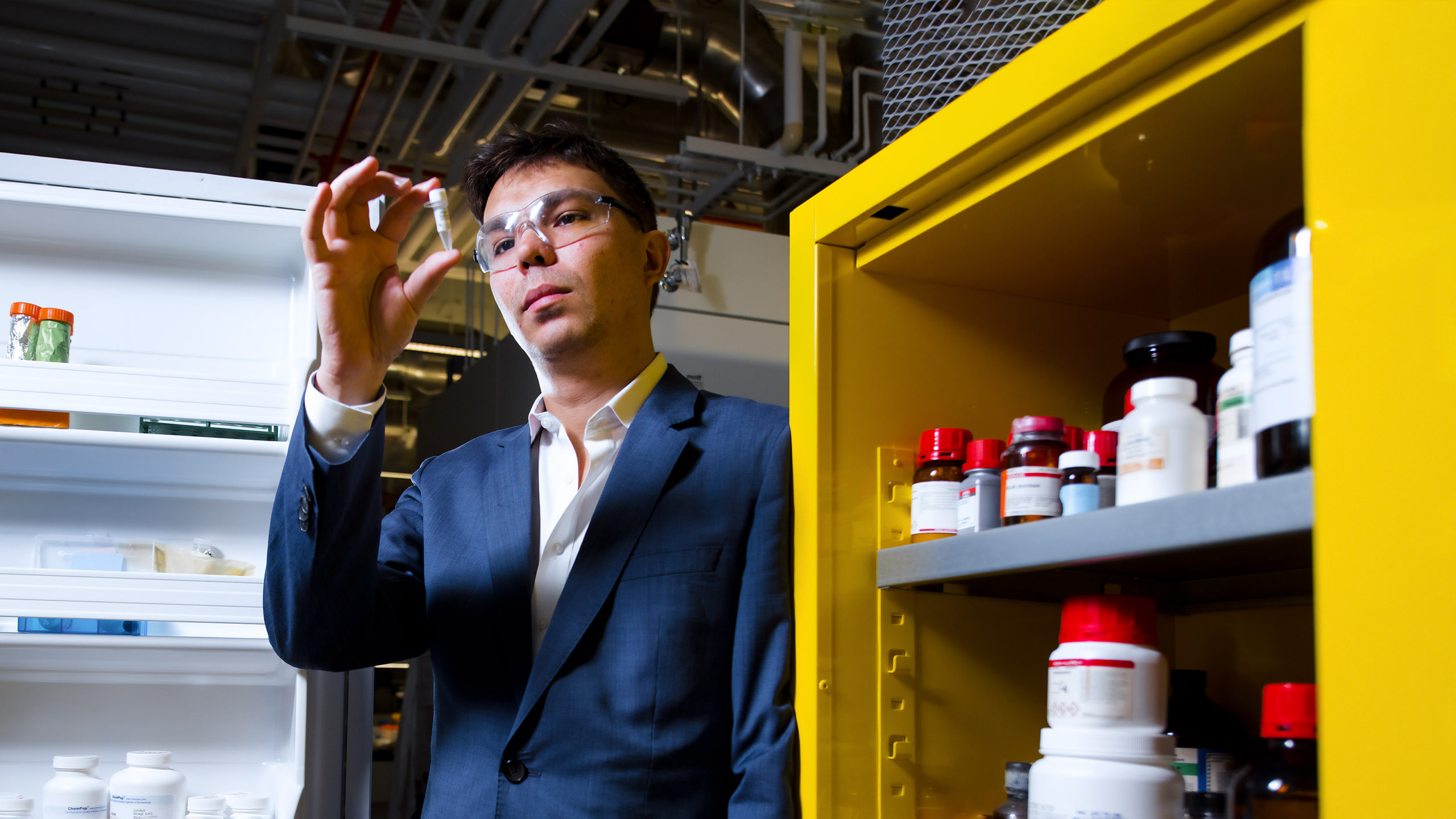 U of A chemistry professor and 48Hour Discovery founder Ratmir Derda has developed DNA-encoded libraries of molecules that fit into a single test tube—an innovation that promises to dramatically reduce the time and cost needed to discover new drugs. (Photo: John Ulan; taken pre-COVID-19)

With the cost of drug development beginning to skyrocket in the 1990s, pharmaceutical giants thought the path to better economics lay in high throughput screening facilities that would test libraries that ranged in size from a few thousand up to million compounds at a time.

“Separate shelves, many rooms, with the emphasis on robotics and automation to physically handle the molecules,” said Ratmir Derda, chemistry professor in the Faculty of Science. “None of that really came to fruition, as it was extremely expensive, cumbersome and unsustainable.”

The problem pharmaceutical companies were trying to solve was in the earliest stage of drug discovery, where even the best high-throughput screening techniques left researchers able to test only a relatively small number of molecules at a time.

“All the chemicals in the world in one test tube”

Two decades later, Derda has developed billion-scale DNA-encoded libraries of molecules that fit in a single test tube and can be searched—not by trial and error, but by a technique similar to searching for information on the internet.

“Who needs vast infrastructure filled with tubes and labels, when we can put all the chemicals in the world in one tube and label them using DNA?” said Derda, a professor in the Department of Chemistry.

With Derda’s technology—part chemistry, part artificial intelligence—potential drug targets are retrieved using the interaction between target proteins from, for instance, a cancer cell and the molecule library in the test tube.

“What used to take six months and cost a million dollars or more, can now be done in 48 hours for one-tenth of the cost,” said Derda.

This blend of biology and informatics is behind Derda’s 48Hour Discovery (48HD), a four-year-old U of A spinoff company that is working with some of the biggest pharmaceutical companies in the world.

“We’re not changing the entire process,” said Derda of the path of a new drug to market that includes, on average, a $2.5-billion price tag, 12 years of development and a wake of 5,000 possibilities that failed at some point along the way.

“There are clinical trials, regulatory approvals, multiple moving parts. This is a cost-cutting exercise and is definitely a way to get further along the pipeline by using less and by being more sustainable in how you approach discovery.”

The company recently received $650,000 through the Montreal-based CQDM Quantum Leap program with support from Merck Canada, as well as the U of A’s GlycoNet, to screen targets selected by Merck Pharmaceuticals.

“This technology, or similar technologies, was on Merck’s radar for the last 10 years,” said Derda. “We’re one of the next-generation companies they add to their collaboration that they can work with.”

“We have a pretty good revenue base for a company that’s four years old,” said David Alton, 48HD vice-president of finance and development. ”We are self-financing, we’re not spending investors’ money, we’re not having to raise money to go forward. For the tech world and the biotech world, it’s fairly unique to be revenue-driven at this point.”

And while the biggest pharmaceutical companies are approaching 48HD to inquire about the services, 48HD has a couple of its own projects on the go.

In the early days of the COVID-19 pandemic, the biotech startup was brought into the fray with some funding from Alberta Innovates to help identify a promising antiviral against the virus that causes COVID-19.

48HD’s VP of research, John Dwyer, was working on an antiviral that showed promise against AIDS and SARS but was shelved in the early 2000s.

“We picked it up and thought maybe this would work for (the new) coronavirus—that was kind of the genesis of it,” said Alton.

The U of A startup also ventured into drug development and thus far has promising preliminary data on a drug target for a gastrointestinal ailment, now being tested at the company’s new site in San Diego.

“Drug discovery is a complex process that can cost billions of dollars,” said Derda. “But there are innovations at every step of the process that could make this process more streamlined that thereby lower its cost and make it more sustainable.”